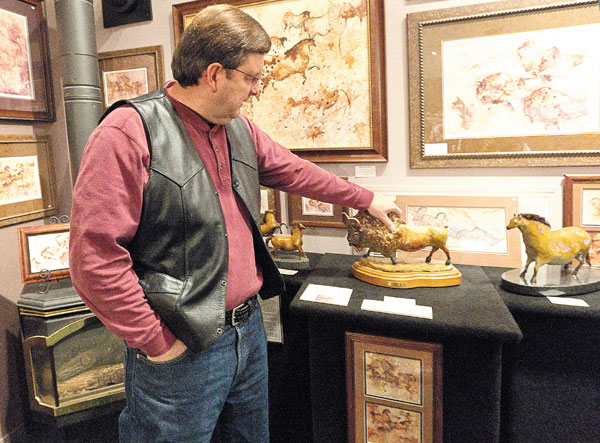 There was a time when as many as 12 galleries lined the main street of this small town nestled at the foot of the Wallowas. These days, only half that many remain, and Aspen Grove Gallery has been around the longest.

Owned by Mark Kortnik and Carol McLaughlin, Aspen Grove opened in its original location in 1987 and for the past nine years has graced the north end of town with a selection of award-winning oils, watercolors, pottery, photography, mixed media pieces and jewelry.

"We are what we are because we are part of the Joseph art scene,'' Mark said. "It is a very special place for showing and experiencing art.''

Mark moved to Wallowa County from Sacramento after meeting and marrying a local artist, Carol McLaughlin. Together they opened the gallery and make their living producing, promoting and selling their work and the work of other regional artists. Their home is attached to the gallery. That arrangement, Mark said, makes it possible to stay open year round.

"We don't want to miss people who come to the gallery in the off season,'' he said. "This is the way to do it if you live in Joseph. It's what has made it possible to stay in business. We work in our home and can hear if people come in. We produce most of our art in the winter and run the gallery in the summer. The two most important factors are: be available to customers and choose a good location. With this arrangement, we have done both those things."

Originally the gallery sold only Mark and Carol's work, but as their inventory expanded to carry the work of other artists, they needed more space. This precipitated moving three times and finally landing in the current location.

Today they exhibit and sell the work of eight artists and are almost out of room again. Mark said he has turned down the work of "flat,'' or one-dimensional, artists because he is out of wall space. Three-dimensional pieces, bronze sculptures, are what he is seeking at this point.

Artists show up at the gallery with art they want to market, or they

e-mail a resume with pictures of their work to him. Aspen Grove does not take art pieces on consignment. Mark and Carol own all the pieces that are for sale in the gallery. Mark said they do this not because it is more lucrative, but because they choose to promote art that they believe in.

The general themes in artwork they select include the West, wildlife, Native American culture and Pacific Northwest landscapes. The target market is predominantly visitors from Portland, Boise, Spokane, Bend and California. Mark said the more modern art selections would not sell here — the people who come to this area expect to see these themes.

The local economy is a little too slow to support much buying, collecting and displaying of artwork, according to Mark's experience. He said people in rural areas rarely have the discretionary funds to spend on art. Many of the local residents have the impression that original art or numbered prints of original pieces are too expensive for most working-class folks to own. But there are pieces of original art priced as low as $28 and as high as $6,000 at Aspen Grove Gallery. Carol has created original watercolor greeting cards for around $2 that are suitable for framing.

"We are not just in it for the money," Mark said. "We have a passion for producing and promoting art. It's what we believe in. People need this beauty in their lives. Life is more than hard work. Art makes you enjoy life."

Carol moved to Oregon with her family in 1973. The McLaughlins are well known in Wallowa County for their creativity and support of the community. Carol works with a variety of materials to create her two- and three-dimensional pieces. She is reknowned for her watercolors of wild and domestic flowers, songbirds and California quail.

Her re-creations of ancient cave drawings found in France and Spain are hauntingly familiar and unique at the same time. She has also produced bronze sculptures of bison, horses and caribou based on the figures in 17,000-year-old cave paintings, which are on display at Aspen Grove Gallery.

One of her most recent creations, bronze "spirit pendants" touched by subtle patinas, are one of the most economical ways to possess a bronze figurine from Joseph.

Carol is also trying her hand at ledger art, creating images on actual ledger pages as Native American artists did in the early 20th century because no other paper was available.

Mark's work embodies the spirit of magnificence in the wildlife he paints. He is well known for his Northeast Oregon landscapes and his images of some of the most majestic animals found in the wild. Eagles, wolves, buffalo and elk stare from his canvases, often emerging from a site alive with ancient petroglyphs.

Mark started painting at a very young age and specializes in the realistic portrayal of wildlife. However, his aspen grove impressions and vibrant fields of poppies show the breadth of his talent. His latest piece, "Sacred Forest,'' a near-life-sized bald eagle, is on display in the gallery. No prints are yet available.

Other artists' work available at Aspen Grove Gallery include raku pottery by Jill Smith and Gay Leifert of Spokane, and wood cravings by Jerry Polan from La Pine.

Mark said the gallery has never displayed apparel before but these jackets are both a garment and a piece of art and only two are left.

Stoneware from Clay in Motion in Walla Walla, in a variety of designs and glazes, include the handwarmer mug, which they designed and copyrighted.

Aspen Grove Gallery is the dealer for most of Oregon for Greenwich Workshop numbered prints of well known artists including Howard Terpining, the best selling Nez Perce historical painter in the country. Mark said the Autry Museum of Western Heritage in Los Angeles buys all of Terpening's original paintings for $1 million each. Only the prints are available through Greenwich Workshop publishers.

Aspen Grove Gallery also offers custom framing and matting, which it took over from the Art Angle, a landmark business on Joseph's Main Street for many years. Mark said people tell him it is reassuring to have an artist help them decide on the color and design of the frames and mats for the pieces they bring to him.

Mark and Carol have both exhibited at the Wallowa Valley Festival of Arts held each spring in Joseph. Mark said it is a good local venue that promotes art, as does the Art Walk in mid-May where galleries in Joseph show their newest art acquisitions available for the coming season.

Mark said a local art show should reflect the area and what is being promoted in the local galleries.

Sometimes art show judges choose the sensational and controversial, not the beautiful, pieces to receive awards, as was the case in the 2010 Wallowa Valley Festival of Arts, Mark said. The piece judged Best of Show was a modern, jarring creation of a choker necklace made of Exacto knife blades.

"This piece did not reflect the dominant culture of this area,'' Mark said. "The public can become confused by the choices a judge makes without guidance as to what his or her goal is in judging a show."

There are two kinds of art — commercially sellable art and academic art, Mark said. Commericial art is what many galleries promote to pay the bills; academic art is art that takes a risk. It is new and unconventional and doesn't always involve good taste, he said. This is the type of art one might enter in a show in Portland or other metro area, and it may reflect the dominant culture of that area, and so is accepted more readily.

Hours at the Aspen Grove Gallery are 10 a.m to 5:30 p.m. Monday through Saturday and by appointment on Sunday, year around. Some of the pieces available at the gallery can be viewed on the website www.aspengrovegallery.com and links to Mark and Carol's websites are provided there.